Playing at the World: Gary Gygax on "Tomorrow" with Tom Snyder

Gygax: [00:03:13]
OK, now, let's - I'll pick it up as if you were actually in a dungeon, and I'll relay to you, because I have to be your eyes and ears and everything, and you're going to tell me what kind of information you need. So we'll assume that you are in a four-way passageway underground and you can choose any direction you want to go. Ten foot wide stone corridors deep beneath the earth. Now, you have a choice of any of the four directions, you tell me where you go to.

Gygax: [00:03:44]
OK, you go west and I tell you how many feet, you've gone a hundred feet west - and suddenly there's a huge bronze door before you, with a big doorknocker on it, a big ring that obviously opens the door and serves as a knocker also. Do you want to turn around and go back the other way? Open the door? Knock first? What would you like to do?

Gygax: [00:04:05]
OK. Now, without having all of this written down, of course, there could be, the - perhaps the knocker will trigger a stone block that drops on your head.

This morning in Angband...

Dain the Ranger finds himself at a 4-way intersection on lvl 6.

He moves west down the corridor.

He is confronted by a large sturdy door.

It's been a few months since I last played Angband, 9 to be exact, so today I rolled up a new Ranger and went back into the dungeon.
A bit rusty with the controls after being away for awhile so I took it slow.

I don't know, there's something very exciting about a new character cautiously entering the beginning levels, taking your time with your actions, it's a delicate time in the development of your character, your own education in the game and learning the class you've selected.
Slowly building up your inventory with low end drops and random items left on the dungeon floor, possibly from previous adventurers or maybe something else, my mind wanders.
Torchlight dimly illuminating your path forward, rounding a corner @! 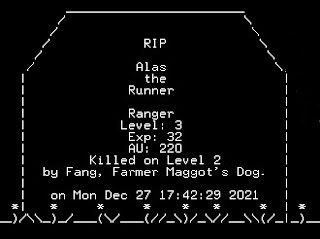 There is a question old sci-fi booksellers like to ask younger readers of the genre.

'What is the golden age of Science Fiction'?

In response, some people:

Give it a little thought then venture forth what they believe to be the approximate decade of the 'Golden Age'.

Don't answer and silently ask themselves 'Why is this dusty old fart talking to me'?

Secretly know the answer but play dumb to allow the seller a quippy moment.

Now, if you fall for the trap and take a shot an answer it will be incorrect.

The seller will slyly state.

'The Golden Age of sci-fi is'.

Or something reasonably close to that age, answers very from person to person.

I've always taken the answer to imply that it's an age, any age really, where one's imagination burns brightly at the input of new electric ideas, of forbidden knowledge attained or of fantastical images over saturated with color blazoned upon wrappers of pulps, books and magazines. Something that once seen cannot be unseen again and something that resonates so deeply in a person that it forever changes them and binds them tightly within its grasp creating a gleeful sojourner along a zealot's path.

An overly romantic take on the answer anyway.

The question can be applied to a great many things.
'What is the golden age of 'fill in the blank'?

The answer is still the same, it's not a date.

I belong to a certain alphabetic generation and because of that I was fortunate enough to have played my 3 favorite games; Dungeons & Dragons, Magic: The Gathering and World of Warcraft during what I believe were truly their chronological golden ages...though that's probably an arguable point.

But whether I was 12 or 26 or 39 mattered not as each affected me profoundly.
Each I played for a period of time and each I eventually stopped playing...for various reasons.
But, I never truly gave up on then and deep down I knew that I was simply taking a break rather than quitting.

Magic: The Gathering arrived in my world after a long hiatus from playing D&D.
To this day I cannot remember how or where I found it, it may have found me, but in late 1994 I was opening packs of Revised and Fallen Empires knowing full well I was addicted.

Ultimately Magic got 10 years of my attention but by 2004 I was no longer enjoying it. Competitive play, which I willingly went into, had sucked all the fun out of the game and more matches of rage and anger took the place of casual joyful play.
After several months of soul searching I sold my collection and promised myself not to return until I had forgotten how to play and/or became excited about the game again, like I was in 1994.

And that, was that.


I wasn't looking for it but once again Magic found me when I stumbled upon an article about the newest Magic set: Adventures in the Forgotten Realms (AFR) a Dungeons & Dragons themed expansion.
And just like that, Magic was back in my life.

The old obsessions returned immediately as I read the article, wanting to collect the entire set.
Just AFR, nothing else, just this one set...and any other subsequent D&D related expansions.

Things had changed since I last opened a pack and looking through the card list I needed to wrap my head around alternative art cards, full art, extended art, showcase and commander cards, which had a foil version and which did not, dungeon cards, art cards and...what the fring was a collector pack?

Mostly though I wanted to play, did it really have a D&D feel?

So I set off on my quest to discover the answers to my questions and now feel ready to offer up my modest insights and opinions about the cards and observations on play with a little hindsight and perspective from a 17 year break from the game.

And though this will not be timely subject matter as AFR was released 5 months ago, a veritable eternity, I feel a deeper dive is in order to explore the set, the game and myself I suppose as I return to a once loved the reviled game in my life.

This will take some time to work through.

For the time being, I will simply start with this post. 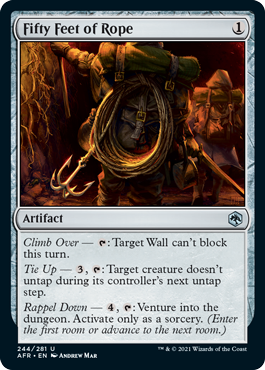 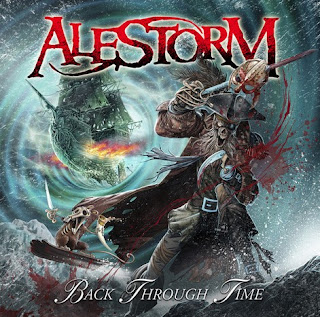 A ship privately owned and crewed but authorized by a government during wartime to attack and capture enemy vessels.

The captain or a crew member of such a vessel.

Stan Roger's 1976 sea shanty 'Barrett's Privateers' has been in my head for days now, but not his fantastic rendition.
Instead, the catchy, fast moving 2011 cover by Alestorm has been trashing the crew quarters of my mind.

A tragic tale of a young fisherman lured by easy riches to board the scummiest vessel he'd ever seen and soon be fated to become the last of Barrett's privateers. 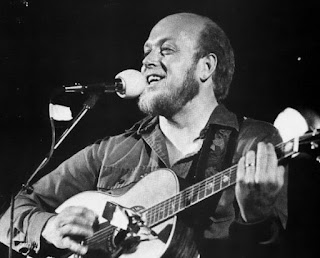 What a tale Stan!

Alestorm
Back Through Time
2011

Oh, the year was 1778
How I wish I was in Sherbrooke now
A letter of marque came from the king
To the scummiest vessel I've ever seen
God damn them all! I was told
We'd cruise the seas for American gold
We'd fire no guns, shed no tears
But I'm a broken man on a Halifax pier
The last of Barrett's Privateers

Oh, Elcid Barrett cried the town
How I wish I was in Sherbrooke now
For twenty brave men all fishermen who
Would make for him the Antelope's crew
God damn them all! I was told
We'd cruise the seas for American gold
We'd fire no guns, shed no tears
But I'm a broken man on a Halifax pier
The last of Barrett's Privateers

The Antelope sloop was a sickening sight
How I wish I was in Sherbrooke now
She'd a list to the port and her sails in rags
And the cook in the scuppers with the staggers and jags
God damn them all! I was told
We'd cruise the seas for American gold
We'd fire no guns, shed no tears
But I'm a broken man on a Halifax pier
The last of Barrett's Privateers

On the King's birthday we put to sea
How I wish I was in Sherbrooke now
We were 91 days to Montego Bay
Pumping like madmen all the way
God damn them all! I was told
We'd cruise the seas for American gold
We'd fire no guns, shed no tears
But I'm a broken man on a Halifax pier
The last of Barrett's Privateers

On the 96th day we sailed again
How I wish I was in Sherbrooke now
When a bloody great Yankee hove in sight
With our cracked four pounders we made to fight
God damn them all! I was told
We'd cruise the seas for American gold
We'd fire no guns, shed no tears
But I'm a broken man on a Halifax pier
The last of Barrett's Privateers

Now the Yankee lay low down with gold
How I wish I was in Sherbrooke now
She was broad and fat and loose in the stays
But to catch her took the Antelope two whole days
God damn them all! I was told
We'd cruise the seas for American gold
We'd fire no guns, shed no tears
But I'm a broken man on a Halifax pier
The last of Barrett's Privateers

Then at length we stood two cables away
How I wish I was in Sherbrooke now
Our cracked four pounders made an awful din
But with one fat ball, the Yank stove us in
God damn them all! I was told
We'd cruise the seas for American gold
We'd fire no guns, shed no tears
But I'm a broken man on a Halifax pier
The last of Barrett's Privateers

The Antelope shook and pitched on her side
How I wish I was in Sherbrooke now
Barrett was smashed like a bowl of eggs
And the Main truck carried off both me legs
God damn them all! I was told
We'd cruise the seas for American gold
We'd fire no guns, shed no tears
But I'm a broken man on a Halifax pier
The last of Barrett's Privateers

So here I lay in my 23rd year
How I wish I was in Sherbrooke now
It's been 6 years since we sailed away
And I just made Halifax yesterday
God damn them all! I was told
We'd cruise the seas for American gold
We'd fire no guns, shed no tears
But I'm a broken man on a Halifax pier
The last of Barrett's Privateers