I've been playing Angband since November-ish of 2020, not my first go around with the game but definitely the longest serious stretch of play.
It has captured my attention.

Recently a very interesting situation presented itself in game, a unique and unexpected encounter that I'm chomping at the bit to get into and want to document here.

Before I get into those upcoming posts I feel I need to give a very brief, bare bones description of the game to maybe pique your interest and look into for yourself.

If you're not familiar with Angband it's not your fault. We play in a world drowning in games and Angband is an OLD GAME, built on a OLDER GAME, inspired by a SLIGHTLY OLDER GAME which places us somewhere around 1980.

It's a dungeon crawler based on Tolkien's legendarium but it feels like old school D&D to me...imho.

In short, the game is:

'Angband is a roguelike game set in a high-fantasy universe. The game world is made up of levels, numbered from zero (“the town”) to some maximum depth. Levels are increasingly dangerous the deeper they are into the dungeon. Levels are filled with monsters, traps, and objects. Monsters move and act on their own, traps react to creatures entering their square, and objects are inert unless used by a creature. The objective of the game is to find Morgoth at depth 100 and kill him.'

Just you (@), the drooling village idiot (t) and your little home (8) in an ASCII world.
There are options to play with very basic tile set graphics but I perfer ASCII. 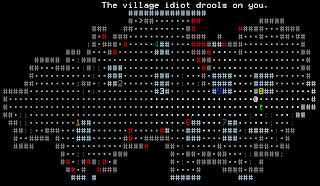 Angband is the devil in the detail.
This game may seem simple but it's more complicated and difficult then you may expect.

You will need to manage the limited resources you carry, watch your encumbrance, eat, and maintain a light source.
All those pesky little details that have been removed from so many modern games are in play here and may kill you if you're not careful.

In contrast, I had a character in WoW with a quiver that held 28,000 arrows and as unbelievable as that was, those arrows also weighed nothing. What's the point in keeping count at all?
Arrows in Angband take up space, have weight and they break...often. 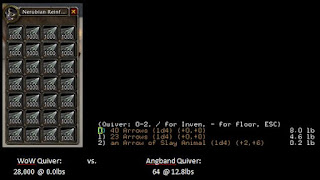 Angband is unforgiving.
It's a difficult game that punishes stupidity and mistakes.
Don't believe me? Roll up a Human Mage as your first character and see how far you get.
This poor bastard didn't even make it to the dungeon, killed in town, level 0...there's 100+ levels to this game.
May as well have died during character creation ala Traveller. 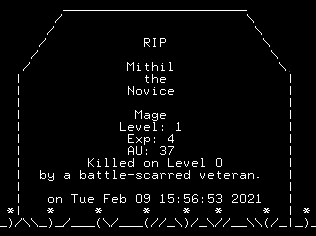 And while were looking at this gravestone keep this in mind when playing. When your character dies, it's dead. No re-spawn points, no resurrection, no do-overs...just dead.

Angband is imagination heavy.
The player must engage with this environment, especially when playing ASCII, by imagining that this: 'S'

is a Mirkwood Spider 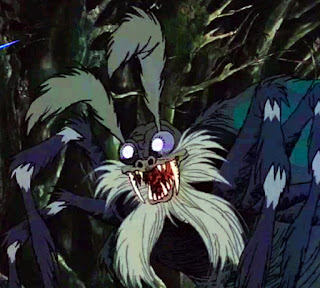 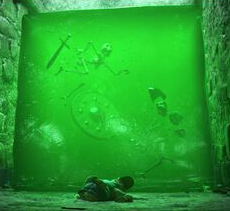 well, here there be Dragons! 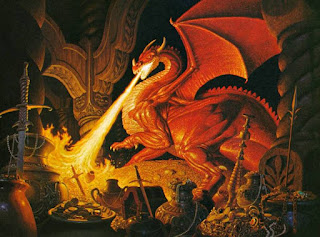 So, I guess it's no wonder that this and others games of similar ilk (Dwarf Fortress) mostly go unnoticed in the world or are, in general, 'unknown'.
They're too hard, require too much thinking and reward you with...text?

But I was promised unique, oversized spaulder skins!!!

This game will challenge you.

It may be the most skillful bit of gaming in your life.

I invite you to explore the game on your terms and make your own opinions.


A good post to whet your appetite: All About The Games