Angband: On the Doorstep pt. 1 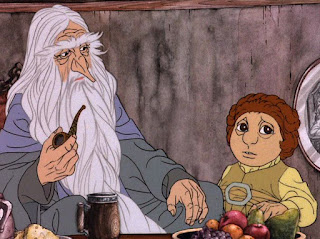 'And how do you intend to enter Smaug's chambers?
Through the front gate? As a house guest?
You would be ashes before you took your seventh step.'

Several weeks ago I was presented with an interesting and quite unexpected situation while playing Angband.

I had at the time started to play a Druid class character, in part because I was intrigued to see how the class would play in Angband and also to take a small break from the Priest character I had been leveling for the past month or so.
Now, playing the Priest took place during a break from playing my Ranger and, playing the Ranger took place during an even longer break from playing my 'iron man' Warrior character and, is a story for another post.
I am currently on a break from my Druid playing a Paladin within a break from a Mage but, this story concerns the Druid.
So many breaks and yet, always playing.

The Druid had been (still is) a learning experience in the application of cautionary movements and selective engagements. Though I relied heavily on spell casting they weren't abundantly offensive or overly powerful. Ranged weapons helped little and melee was an act of desperation most times.
I was just starting to get a feel for the classes subtle control and wary exploration type of play when the adventure presented itself.
I didn't recognize it initially, I think I was a bit stunned by what I was looking at.
I laughed and pshawed out loud for certain.
I stared at the screen for 10 or so minutes trying to figure out some way to salvage the level.
I wasn't sure the Druid had enough ass in his pants to tear into the mess I was looking at, not like the Priest anyhow.
So I continued to look at the screen.

I was ready to call it quits, 'shift <' and head back up the stairs, reset the level and return when, I recognized what it was I was looking at, something familiar, and thought...maybe?

Here, before me was the chance to burgle from the 'Chiefest and Greatest of Calamities'...Smaug!

And I was going to do it Bilbo style!

Well, I was gonna attempt to rip the old wyrm off and run away...at the very least. 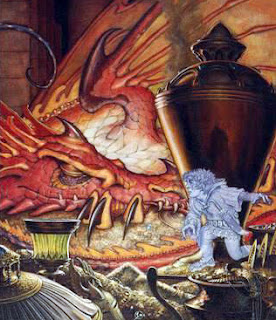