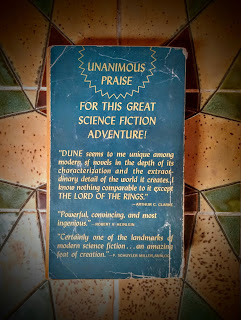 And the price we paid was the price men have always paid for achieving a paradise in this life -- we went soft, we lost our edge.

Then, as the planet killed him, it occurred to Kynes that his father and all the other scientists were wrong, that the most persistent principles of the universe were accident and error.

Yet, it is possible to see peril in the finding of ultimate perfection.
It is clear that the ultimate pattern contains its own fixity.
In such perfection, all things move toward death.

The differences in the ways he comprehended the universe haunted him -- accuracy matched with inaccuracy.
He saw it in situ.
Yet, when it was born, when it came into the pressures of reality, the now had its own life and grew with its own subtle differences.

How often it is that the angry man rages denial of what his inner self is telling him.

One of the brotherhood of prophets. (A term of scorn in the Imperium, meaning any "wild" person given to fanatical prediction.)

"Do you have any idea who this Muad'Dib could be?" the Emperor asked.

"One of the Umma, surely," the Baron said.
"A Fremen fanatic, a religious adventurer. They crop up regularly on the fringes of civilization.
Your Majesty knows this."

The eye that looks ahead to the safe course is closed forever.

"I never knew the city man could be trusted completely," Stilgar said.
"I was a city man myself once," Paul said.

These city people have Fremen blood.
It's just that they haven't yet learned how to escape their bondage.
We'll teach them.

at November 11, 2020
Email ThisBlogThis!Share to TwitterShare to FacebookShare to Pinterest