Currently Reading: A Case of Conscience 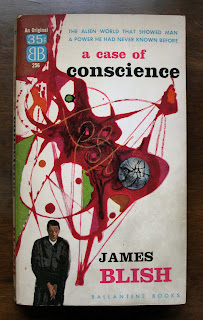 On and on the text ran, becoming more tangled, more evil, more insoluble with every word.

Almost all knowledge, after all, fell into that category.
It was either perfectly simple once you understood it, or else it fell apart into fiction...
all knowledge goes through both stages, the annunciation out of the noise into fact, and the disintegration back into noise  again.
The process involved was the making of increasingly finer distinctions.
The outcome was an endless series of theoretical catastrophes.

All that remained of it was a sensation, almost the taste of the words, but nothing of their substance.

Belief and science aren't mutually exclusive -- quite the contrary.
But if you place scientific standards first, and exclude belief, admit nothing that's not proven, then what you have is a series of empty gestures.

Book One of 'A Case of Conscience' (as I understand) is the original novella published in the September 1953 issue of
IF: Worlds of Science Fiction.
If the story had ended there I would have had plenty to think on, let alone to deal with that stunning end.
Fortunately there is a whole second book ahead of me as I devour this fantastic bit of 'sci-fi'. 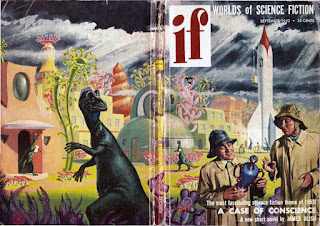